Our CM410 students will practice, rewrite, revise and practice again their Pecha Kucha presentations in preparation for The Student Symposium on Tuesday, December 6 at 10:30 in the A.J. Eastman Library. For their final touches, students will: 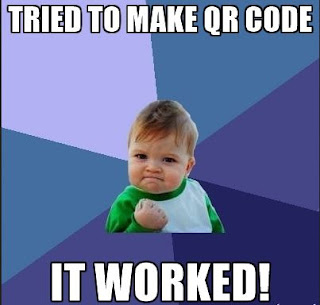 CM410 Students will add one more step to remediating photography: They will recreate their sample photos in 360 using Google Cardboard and https://sphcst.com/upload ! One possibility is below:

In Winogrand's photo, visitors to the 1964 World's Fair in Queens, NY are seated on some of the plentiful public seating provided that is arranged side by side to allow traffic to pass. Visitors look and lean across the seats to interact with each other on the bench. This side by side arrangement is suggestive of classical Greek friezes. 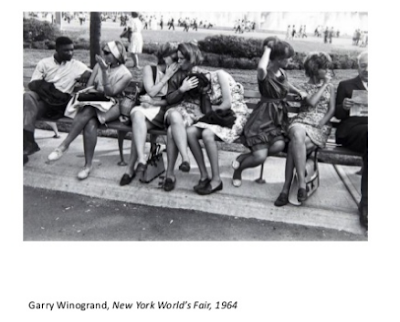 In this recreation a small group of students gather around a bench on the campus quad. The students arrange themselves in a circle, rather than in a line. This arrangement is mostly likely influenced by the arrangement of the seating and walkways in the campus quad, which differ significantly from the longer seating, built to accommodate more people and allow for greater pedestrian traffic, at the World's Fair

When shooting the same scene in VR/3D/360using the Theta S camera, I chose to shoot from inside the circle of friends, a perspective not allowed by 2D photography. When I asked the subject if I could take a snapshot of them, they said "Sure," and began to move into place beside one another. When I explained that they didn't need to move at all, but could say where they were because this was a different kind of photo, they were intrigued. As I sat the camera in the center, some asked, "Is this a VR camera?" and "Does the camera move around in a circle?" This indicated, that, though none of the subjects had used or been photographed in VR, they did have an awareness of the emerging medium.

Posted by DrNick@Nite at 6:57 AM No comments:

The Power of A Picture

Professor Brett Schenning presented on "The Power of a Picture" (see below) and assigned our CM410 students a project to shoot:

The power of a picture from Randy Nichols
Posted by DrNick@Nite at 1:36 PM No comments:

Students in CM410 have been researching Virtual Reality and how this emerging technology is shaping communications across such diverse fields as Psychotherapy, Sports Training, Travel Industry, and Entertainment. They will present their findings at the December Student Symposium  - but in a special presentation format: Pecha Kucha! (**Before the November 22 class, students will post their planning sheet or notes, and a working bibliography or works cited page for their resources.)

This format allows a student to accompany their talk by displaying 20 slides for 20 seconds each, thereby combining concise, clear and compelling writing and speech with rhetorically intentional visual composition. Students will find a wealth of material to work through our Knowing, Making, Doing process on our class website: Limestone Digital!

10 slide designs you can use for pecha kucha presentations from Randy Nichols
Posted by DrNick@Nite at 7:54 AM No comments: